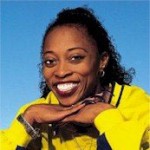 Devers qualified for the 1988 Seoul Olympic Games, but did not medal. Also that year, she earned her Bachelor of Arts degree from the University of California at Los Angeles. In 1990, she was diagnosed with Graves’ disease and underwent radioactive iodine treatment followed by thyroid hormone replacement therapy.

After recovering, Devers won the Gold medal in the 100 meter race at the 1992 Barcelona Olympic Games and Gold medals in the 100 meter race and the 4 by 100 meter relay at the 1996 Atlanta Olympic Games. In 1999, Devers established the Gail Devers Foundation to fund education, health, and community development projects. Devers retired from competition in 2005 and she and her husband are currently developing a resort in Guyana, South America.