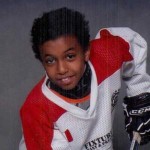 James attended Seneca College where she won numerous titles in ice hockey and had her jersey number retired. From the late 1970s through the 1980s, she played in the Central Ontario Women’s Hockey League where she dominated her opponents. In 1990, she was selected to Canada’s team for the inaugural women’s world championships and led her team to the Gold Medal.

She played in three additional world championships, earning eight Most Valuable Player Awards. In 2005, Hockey Canada honored James with the Female Breakthrough Award for making significant contributions to the promotion and/or development of female hockey in Canada. In 2008, the Angela James Bowl was created to be awarded to the Canadian Hockey League’s top scorer. Also in 2008, she became one of the first women to be inducted into the International Ice Hockey Federation Hockey Hall of Fame. James is currently Director of Athletics for Seneca College.