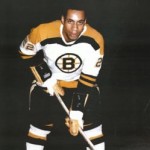 O’Ree started his minor league career in 1957 and made his NHL debut with the Boston Bruins on January 18, 1958. He played in only two games that year and was sent back to the minor leagues until 1961, when he played in 43 games. He scored 10 goals and had 10 assists in his 45 game NHL career, all in 1961. During his NHL career, O’Ree noted that “racist remarks were much worse in the United States than in Canada.”

From 1961 to his retirement in 1978, O’Ree played in the minor leagues, winning two scoring titles. In 1998, O’Ree was appointed Director of Youth Development for the NHL/USA Hockey Diversity Task Force which encourages minority youth to learn and play hockey. In January, 2008, the City of Fredericton named a new sports complex after him and in December, 2008 he received the Order of Canada, the highest civilian award for a Canadian citizen.