By Chimsima Zuhri on October 7, 2010 in African American History, October 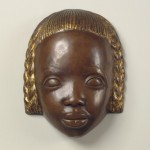 In 1926, Johnson began showing his work with the Harmon Foundation of New York and won numerous awards resulting in national attention. From 1945 to 1965, Johnson made a number of trips to Southern Mexico and started incorporating the people and culture into his work. Johnson died on October 10, 1967 and in 1998 the San Francisco Museum of Modern Art hosted a traveling retrospective of his work.

Johnson’s work is included in the collections of several museums, including the Art Institute of Chicago and the Cleveland Museum of Art. In February, 2010 his work, “Untitled (Standing Woman),” was auctioned for $52,800, a record for one of his works.