By Chimsima Zuhri on October 3, 2010 in African American History, October 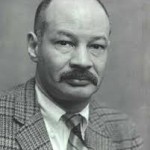 Hines was born November 9, 1913 in Indianapolis, Indiana. He began his formal art training at the age of 31 at the School of the Art Institute of Chicago and later moved to New York City to study at the Pratt Institute. Trained to be an art conservator, he launched a very successful private practice that included clients such as the Yale University Art Gallery and the Whitney Museum of American Art.

In 1972, Hines joined the Smithsonian Institute as Chief Conservator of the National Portrait Gallery and from 1980 to his retirement in 1984 served in the same capacity at the Smithsonian’s Hirshhorn Museum and Sculpture Garden. Hines was active in the Civil Rights Movement, including participating in the 1963 March on Washington and joining the Spiral Group, a group of African American artists formed by Romare Bearden in 1963.