By Chimsima Zuhri on September 24, 2010 in African American History, September 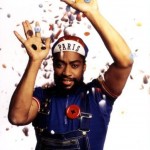 Kelly initially studied at the Parsons School of Design in New York City but in 1979 moved to the fashion capital of the world, Paris, France. In 1985, he created Patrick Kelly Paris and began making outfits for Benetton and upscale Paris boutiques. In 1987, Kelly signed a $5 million contract to create a line of clothing for Warnaco, which gave him international recognition.

In 1986, Time Magazine described his clothing as “fitted, funny and a little goofy” and in 1988 the Washington Post said “Patrick Kelly has a witty way with fashion”. Kelly was proud of his heritage and upbringing as an African American in Mississippi and it was reflected in his work. His clientele included Bette Davis, Grace Jones and Jessye Norman. In 1988, Kelly was voted in as the first American member of the Chambre Syndicale, an elite organization of designers based in Paris. Kelly died on January 1, 1990.

In September, 2004, his work was the subject of an exhibition at the Metropolitan Museum of Art in New York City.