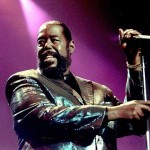 White was born Barrence Eugene Carter on September 12, 1944 in Galveston, Texas. He began his musical career in the early 1960s in singing groups before going out on his own in the mid-1960s. He got his big break producing a female group he had discovered called Love Unlimited. Their 1971 release “Girl’s Point of View” sold more than 1 million copies.