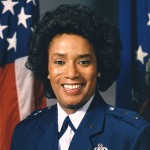 Harris earned her Bachelor of Arts degree in speech and drama from Spelman College in 1964 and was commissioned through Officer Training School in 1965. She has held a variety of assignments, including the first female Aircraft Maintenance Officer, one of the first two female air officers commanding at the U.S. Air Force Academy, and the first female Deputy Commander for Maintenance.

She also served as a White House social aide during the administration of President Jimmy Carter. Harris earned her Bachelor of Science degree in business management from the University of Maryland in 1989. She retired from the air force in 1997. After retiring, she worked at the National Aeronautics and Space Administration as the Florida Site Director and Logistics Process Owner for the company managing the nation’s shuttle program. In 2010, Harris was appointed by President Barack Obama to the Board of Visitors for the U.S. Air Force Academy.