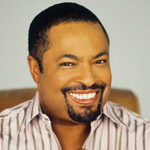 Harris was born June 20, 1955 in Flint, Michigan, but grew up in Little Rock, Arkansas. In 1977, he earned his Bachelor of Arts degree in journalism from the University of Arkansas.