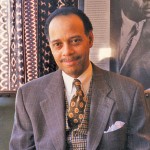 Madhubuti served in the United States Army from 1960 to 1963 and earned his Master of Fine Arts degree from the University of Iowa in 1984.

He is the publisher and Chairman of Third World Press which he founded in 1967, co-founder in 1969 of the institute of Positive Education/New Concept Development Center, and co-founder in 1998 of the Betty Shabazz International Charter School in Chicago. Currently, Madhubuti is the Distinguished Professor of the Gwendolyn Brooks Center for Black Literature and Creative Writing and director of the Master of Fine Arts in Creative Writing program at Chicago State University.