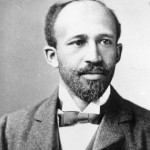 In 1888, Du Bois earned a bachelor’s degree from Fisk University and in 1895 became the first African American to earn a Ph. D. from Harvard University.

Du Bois authored 22 books, including “The Philadelphia Negro” (1899), “The Souls of Black Folks” (1903), and “Black Folks, Then and Now” (1939) and helped establish four academic journals. Du Bois was the most prominent intellectual leader and political activist on behalf of African Americans in the first half of the 20th century. In 1909, he helped found the National Association for the Advancement of Colored People and for 25 years served as the Editor-in-Chief of the Crisis Magazine.

Du Bois was awarded the NAACP Spingarn Medal in 1920. In 1963, Du Bois and his wife became citizens of Ghana, where he died on April 27, 1963. After his death, the Ghanaian government honored him with a state funeral and the W. E. B. Du Bois Memorial Centre which is located in the Cantonments district of Accra. The site of the house where Du Bois grew up in Great Barrington was designated a National Historic Landmark in 1976 and in 1992 the United States Postal Service issued a commemorative postage stamp in his honor.

Several structures at universities around the country are named in his honor. The many books about Du Bois include “W. E. B. Du Bois: Negro Leader in a Time of Crisis” (1959) and “W. E. B. Du Bois, American Prophet” (2007).