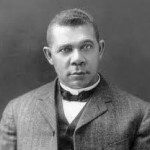 Washington was born enslaved on April 5, 1856 on the Burroughs Plantation in Virginia. His family gained their freedom at the end of the Civil War and Washington was educated at Hampton Institute and Wayland Seminary. In 1881, Washington was appointed the first leader of Tuskegee Institute which he headed for the rest of his life.

Washington was the dominant leader of the African American community from 1890 until his death. This was particularly true after his Atlanta Exposition speech of 1895 where he appealed to whites to give blacks a chance to work and develop separately and implied that he would not demand the vote. Washington associated with the richest and most powerful businessmen of the era and became a conduit for their funding of African American educational programs. As a result, numerous small schools were established through his efforts.