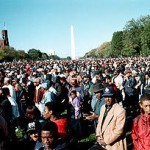 October 16, 1995 The Million Man March occurred in Washington, D.C.Led by the Nation of Islam leader Louis Farrakhan, black men from across the country converged on Washington to “convey to the world a vastly different picture of the Black male and to unite in self-help and self-defense against the economic and social ills plaguing the African American community.”