By Chimsima Zuhri on October 12, 2010 in African American History, October 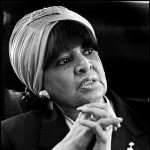 Tucker was born October 4, 1927 in Philadelphia, Pennsylvania. She graduated from Temple University and the University of Pennsylvania, Wharton School. Tucker had a long history in the Civil Rights Movement, including participating in the 1965 march to Selma, Alabama.

She was a convening founder of the National Congress of Black Women and served as national chair in 1992. She also led the effort to make Pennsylvania one of the first states to pass the Equal Rights Amendment. In 1971, Tucker became the Secretary of State for Pennsylvania, making her the first African American female to serve in that capacity in the United States. She served in that position until 1977.

For much of the last years of her life, Tucker was dedicated to removing sexually explicit lyrics from rap and hip-hop records, concerned that the lyrics were misogynistic and threatened the moral foundation of the African American community. One of the buildings next to the Pennsylvania State Capitol Building was renamed the Secretary C. Delores Tucker Building and a state historical marker honoring Tucker is installed outside the entrance.