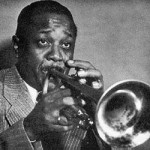 Eldridge was born January 30, 1911 in Pittsburgh, Pennsylvania. He originally played drums, tuba, and trumpet. Eldridge led bands from his early years, moving to St. Louis and New York, where he played in various bands in the early 1930s. From 1941 to 1943, he played in the Gene Krupa Orchestra and then joined Artie Shaw’s band.