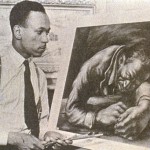 White became interested in art by the age of seven and at 14 was working as a sign painter.

White earned a scholarship to the Art Institute of Chicago and graduated in 1937. After graduation, he joined the Works Project Administration and in 1940 was commissioned to create a mural on the history of the Negro press. In 1947, White had his first one-man show. His works explored the universal conflicts that plague all humankind.

Despite his success, White could not escape racism. His work was included in an exhibition of black artists at the University of Alabama, but the artists were not allowed to attend. Also, the Delgado Museum in New Orleans, Louisiana purchased one of his paintings, but he was denied admission to the museum. Europe was different. On a 1951 trip, he found his work widely known and his skin color was not a concern.

In 1965, White began teaching at the Otis Art Institute in Los Angeles, California and taught there until his death on October 3, 1979. White’s images of the black experience are held in the collections of the Whitney Museum, the Library of Congress, the Joseph H. Hirshhorn Collection, and several universities.