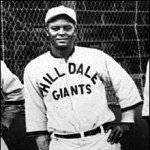 White was born June 12, 1868 in Bellaire, Ohio. He joined the Pittsburgh Keystones of the National Colored Baseball League in 1887, starting a playing career that lasted until 1912.

White made a name for himself in the predominantly white minor leagues before blacks were excluded from playing. He was instrumental in the 1902 formation of the Philadelphia Giants and the later development and operation of various leagues. In 1907, his book “Sol White’s History of Colored Baseball” was published.

White was posthumously inducted into the Baseball Hall of Fame in 2006.