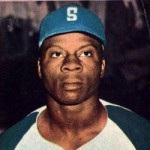 Brown was born June 26, 1915 in Shreveport, Louisiana. He began his professional baseball career in 1934. In 1936, he joined the Kansas City Monarchs with whom he played until 1944 when he joined the army.

During that time he established himself as a powerful hitter, hitting more home runs than Josh Gibson. In fact, Gibson nicknamed him “Home Run Brown.” Brown also regularly had a batting average over .350.

Brown briefly played in the major leagues with the St. Louis Browns in 1947 and was the first black player to hit a home run in the American League. Brown retired from baseball in 1956 and was posthumously inducted into the Baseball Hall of Fame in 2006.