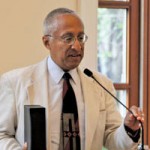 Hill was born May 1, 1907 in Richmond, Virginia. He earned his Bachelor of Arts degree from Howard University in 1931 and his Doctor of Jurisprudence degree from Howard’s School of Law in 1933. Hill won his first civil rights case in 1940 in Alston v. School Board of Norfolk, Virginia which gained pay equity for black teachers.

In 1943, Hill joined the United States Army and served in Europe until the end of World War II. In 1949, he became the first African American to serve on the City Council of Richmond since the late 19th century. In 1951, Hill led the case of Davis v. County School Board of Prince Edward County which in 1954 became one of the five cases decided under Brown v. Board of Education. Hill retired in 1998. During his life, Hill earned many awards, including the American Bar Association Justice Thurgood Marshall Award in 1993 and the NAACP Spingarn Medal in 2005. In 1999, President William Clinton presented him the Presidential Medal of Freedom, the nation’s highest civilian honor.

The Oliver Hill Courts Building in Richmond is named in his honor and the Oliver W. Hill Building in Virginia’s Capitol Square is the first state owned building to be named for an African American. Hill’s autobiography, “The Big Bang: Brown v. Board of Education, The Autobiography of Oliver W. Hill, Sr.,” was published in 2000.