By Chimsima Zuhri on February 14, 2011 in African American History, February 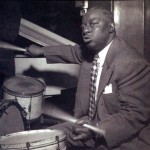 Dodds was born December 24, 1898 in New Orleans, Louisiana. He gained a reputation as a top drummer at an early age, working with Louis Armstrong on Mississippi River steamboat bands. In 1921, Dodds moved to California to work with Joe “King” Oliver and then followed him to Chicago.

Dodds is regarded as one of the best jazz drummers of the pre-big band era and he revolutionized the drum kit by inventing the floor bass or “kick drum.” Additionally, Dodds is probably the first jazz drummer to record unaccompanied. A biography, “The Baby Dodds Story,” was published in 1959.