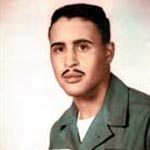 Sargent was born January 6, 1938 in Hampton, Virginia. He joined the United States Army and was serving as a First Lieutenant in Company B, 4th Battalion, 9th Infantry Regiment, 25th Infantry Division. On March 15, 1967, while in Hau Nghia Province of the Republic of Vietnam, his actions earned him the medal. His citation partially reads: “For conspicuous gallantry and intrepidity in action at the risk of his life above and beyond the call of duty.

While leading a platoon of Company B, 1st Lt. Sargent was investigating a reported Viet Cong meeting house and weapons cache……..As they approached another Viet Cong emerged and threw 2 hand grenades that landed in the midst of the group. 1st Lt. Sargent fired 3 shots at the enemy then turned and unhesitatingly threw himself over the 2 grenades. He was mortally wounded, and his 2 companions were lightly wounded when the grenades exploded.

By his courageous and selfless act of exceptional heroism, he saved the lives of the platoon sergeant and forward observer and prevented the injury or death of several nearby comrades. 1st Lt. Sargent’s actions were in keeping with the highest traditions of the military services and reflect great credit upon himself and the U. S. Army.” For this he was posthumously awarded the Medal of Honor, America’s highest military decoration.