By Chimsima Zuhri on February 7, 2011 in African American History, February 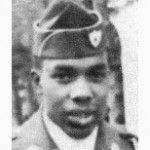 Ashley was born October 12, 1931 in Wilmington, North Carolina but raised in New York City. Ashley joined the United States Army in 1950 and served in the Korean and Vietnam Wars. On February 6, 1968, while serving as a sergeant first class in Company C of the 5th Special Forces Group (Airborne), 1st Special Forces, his heroism earned him the medal.

His citation partially reads: “During the ensuing battle, Sfc. Ashley led a total of 5 vigorous assaults against the enemy, continuously exposing himself to a voluminous hail of enemy grenades, machine gun and automatic weapons fire. Throughout these assaults, he was plagued by numerous booby-trapped satchel charges in all bunkers on his avenue of approach.

During his fifth and final assault, he adjusted air strikes nearly on top of his assault element, forcing the enemy to withdraw and resulting in friendly control of the summit of the hill. While exposing himself to intense enemy fire, he was seriously wounded by machine gun fire but continued his mission without regard for his personal safety.

After the fifth assault, he lost consciousness and was carried from the summit by his comrades only to suffer a fatal wound when an enemy artillery round landed in the area. Sfc. Ashley displayed extraordinary heroism in risking his life in an attempt to save the lives of his entrapped comrades and commanding officer.”

The Medal of Honor, America’s highest military decoration, was posthumously presented to Ashley’s family on December 2, 1969. The Eugene Ashley High School in Wilmington is named in his honor.