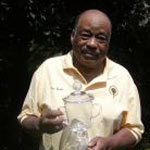 Brown started in golf as a caddy at the municipal golf course. He received his PGA Tour card in 1963 and in 1964 won the Waco Turner Open, the first African American to win a PGA event. Brown played on the PGA Tour for 17 years and won one other PGA event, the 1970 Andy Williams – San Diego Open Invitational. Brown had 12 additional professional wins before joining the Senior PGA Tour in 1985. He is currently the head pro at Madden Golf Course in Dayton, Ohio.