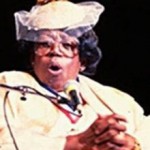 Smith was born June 6, 1906 in Rolling Fork, Mississippi, but raised in Memphis, Tennessee. In 1922, she and her sisters formed a gospel quartet called the Ford Sisters.

After her sisters married and quit the group, Smith started a solo career. To supplement her household income, she became one of the first gospel singers to tour regularly. Rarely recorded, her reputation was based on her live performances. Smith was the first to introduce the “song and sermonette,” the act of delivering a lengthy sermon before, during, or after a performance. By the early 1950s, Smith had turned to evangelical work which she continued until her death.