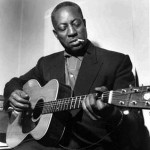 He began playing music at an early age and at the age of ten made himself a fiddle from a cigar box and began playing spirituals and folk songs. Broonzy was drafted into the United States Army in 1917 and served two years in Europe during World War I. In 1920, he moved to Chicago, Illinois and released his first records in 1927.