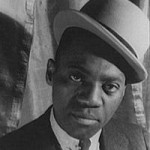 Robinson was born May 25, 1878 in Richmond, Virginia. He began to dance for a living at the age of six. Robinson served in the United States Army from 1898 to 1900. He gained success and fame on the black theater circuit and did not dance for white audiences until he was fifty years old when he was featured in “Blackbirds of 1928,” a black revue for white audiences.

After 1930, Robinson appeared in 14 motion pictures, most frequently as a butler opposite Shirley Temple in such films as “The Little Colonel” (1935) and “Rebecca of Sonnybrook Farm” (1938). Robinson also performed on the stage in “The Hot Mikado” (1939) and “All in Fun” (1940). Despite earning more than $2 million during his lifetime, Robinson died penniless. In 1973, a statue of Robinson was unveiled in Richmond, Virginia. Robinson was inducted into the National Museum of Dance C.V. Whitney Hall of Fame in 1987.

In 1989, a congressional resolution declared National Tap Dance Day to be May 25, Robinson’s birthday. His biography, “Mr. Bojangles: the biography of Bill Robinson,” was published in 1988.