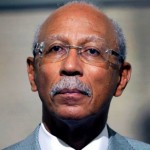 November 24, 1943 David Bing, hall of fame basketball player and Mayor of the City of Detroit, was born in Washington, D.C.

Bing attended Syracuse University where he led the basketball team in scoring each of the years he played and in 1966 was named an All-American. Bing earned his Bachelor of Arts degree in economics and marketing in 1966. He was selected by the Detroit Pistons in the 1966 NBA Draft and was named Rookie of the Year that season.

Over his 12-season professional career, Bing was a seven time All-Star and in 1977 was selected for the J. Walter Kennedy Award for “outstanding service and dedication to the community.” Bing was inducted into the Naismith Memorial Basketball Hall of Fame in 1990 and in 1996 was named one of the NBA’s 50 Greatest Players.

In 1980, Bing opened Bing Steel with four employees and by 1984 the company was turning a profit and he was awarded the National Minority Small Business Person of the Year Award by President Ronald Reagan. In 1990, Bing received the Schick Achievement Award for his work after his NBA career.

In May, 2009, Bing was elected interim Mayor of Detroit, Michigan in a special election and in November of that year he was elected to a full term.