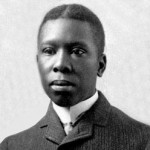 Dunbar was born June 27, 1872 in Dayton, Ohio. He wrote his first poem at the age of six and gave his first public recital at nine.

Dunbar served as the editor of the school newspaper, class president, and president of the school literary society at his all-white high school. Dunbar’s first book of poetry, “Oak and Ivy,” was published in 1892 and his second book, “Majors and Minors” (1895), brought him national fame. During his life, Dunbar wrote 12 books of poetry, four books of short stories, five novels, and a play. He also wrote the lyrics for “In Dahomey” which, in 1903, was the first musical written and performed entirely by African Americans.

In 1975, the United States Postal Service issued a commemorative postage stamp in his honor. A number of places are named in his honor, including schools and libraries in various cities and Dunbar Hospital in Detroit, Michigan. Several biographies have been published about Dunbar, including “Paul Lawrence Dunbar: Poet of His People” (1936) and “Oak and Ivy: A Biography of Paul Lawrence Dunbar” (1971).