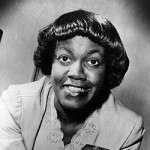 Brooks was born June 7, 1917 in Topeka, Kansas but raised in Chicago, Illinois. She published her first poem in a children’s magazine at 13 and by the time she was 16 she had a portfolio of 75 published poems. Brooks’ first book of poetry, “A Street in Bronzeville,” brought her critical acclaim and she was selected one of Mademoiselle Magazine’s Ten Young Women of the Year. She also won her first Guggenheim Fellowship and became a fellow of the American Academy of Arts and Letters.

Her second book of poetry, “Annie Allen,” won the Pulitzer Prize for Poetry, the first given to an African American. In 1962, Brooks began teaching creative writing, which she did at a number of institutions, including Northeastern Illinois University and Columbia University. Her book length poem, “In the Mecca” (1968), was nominated for the National Book Award for Poetry. Also in 1968, Brooks was appointed Poet Laureate of Illinois and in 1985 she was selected the Library of Congress’ Consultant in Poetry (now titled Poet Laureate).

Brooks was inducted into the National Women’s Hall of Fame in 1988 and, in 1994, was chosen as the National Endowment for the Humanities’ Jefferson Lecturer, the highest award in the humanities given by the federal government. In 1995, she was presented the National Medal of Arts, the highest honor bestowed on an individual artist by the United States, by President William Clinton.

Brooks was awarded more than 75 honorary degrees from colleges and universities worldwide and there are a number of schools in Illinois named in her honor. Brooks’ biography, “A Life of Gwendolyn Brooks,” was published in 1990.