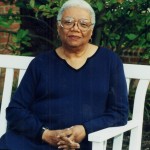 Clifton graduated from the State University of New York in 1955 and over the next 15 years worked for the New York State Division of Employment and the federal Office of Education. In 1996, her poetry was included in Langston Hughes’ anthology “The Poetry Of The Negro.” Clifton’s first poetry collection, “Good Times,” was published in 1969 and listed by the New York Times newspaper as one of the year’s 10 best books.

Her children’s book, “Everett Anderson’s Good-bye,” won the 1984 Coretta Scott King Award. In 1988, Clifton became the first author to have two books of poetry chosen as finalist for the Pulitzer Prize. Her volume “Blessing the Boats: New and Collected Poems 1988 – 2000” won the National Book Award for Poetry in 2000. In 2007, Clifton won the Ruth Lilly Poetry Prize which honors a living United States poet whose “lifetime accomplishments warrant extraordinary recognition.”

From 1971 to 1974, Clifton was poet-in-residence at Coppin State College and from 1979 to 1985 she was Poet Laureate of the state of Maryland. From 1985 to 1989, Clifton was a professor of literature and creative writing at the University of California and from 1995 to 1999 was visiting professor at Columbia University.

Clifton died February 13, 2010 and posthumously received the Robert Frost Medal for lifetime achievement from the Poetry Society of America that same year. Studies about her life and writings include “Wild Blessings: The Poetry of Lucille Clifton” (2004) and “Lucille Clifton: Her Life and Letters” (2006).