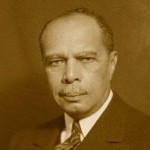 Johnson was born June 17, 1871 in Jacksonville, Florida. He earned his Bachelor of Arts degree and Master of Arts degree from Atlanta University in 1894 and 1904, respectively. In 1900, Johnson along with his brother, John Rosamond, co-composed “Lift Every Voice and Sing” which became known as the Negro National Anthem. From 1906 to 1909, he served as United States Consul to Venezuela.

During that time, he wrote his most famous book, “The Autobiography of an Ex-Colored Man,” which was published in 1912. Other works by Johnson include “The Book of American Negro Spirituals” (1925), “Black Manhattan” (1930), and “Negro Americans, What Now?” (1934). In 1914, Johnson became editor of the New York Age and in 1916 he became the national organizer for the National Association for the Advancement of Colored People.

In 1920, he was elected to manage the organization, the first African American to hold that position, and eventually he became the first black secretary in the organization’s history. In 1925, Johnson was awarded the NAACP Spingarn Medal for outstanding achievement by an American Negro and in 1927 his work “God’s Trombones: Seven Negro Sermons in Verse” was published and won the Harmon Gold Award.

Throughout the 1920s and 1930s, Johnson was a major inspiration and promoter of the Harlem Renaissance. In 1988, the United States Postal Service issued a commemorative postage stamp in his honor. Johnson published his autobiography, “Along This Way: The Autobiography of James Weldon Johnson,” in 1933.