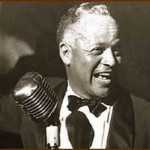 Daniels was born September 12, 1915 in Jacksonville, Florida. Daniels was a nightclub entertainer and was the biggest cabaret draw in New York City during the 1950s. He was also popular in Europe and in 1952 headlined at The London Palladium and broke the house attendance records. His version of “That Old Black Magic” recorded in 1950 is reported to have sold more than 12 million copies.

In 1952, he starred in the 15 minute “The Billy Daniels Show” on ABC-TV, one of the first television programs to star a black performer. In 1958, Daniels was the first entertainer to sign a long term contract to appear in Las Vegas when he signed for three years at the Stardust. He also performed on Broadway, most notably in 1964 with more than 700 performances of “Golden Boy.” He also performed in “Hello Dolly” in 1975 and “Bubbling Brown Sugar” in 1978. Daniels has a star on the Hollywood Walk of Fame.