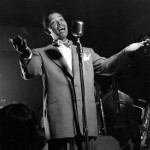 Eckstine was born July 8, 1914 in Pittsburgh, Pennsylvania and began singing at age seven. In 1939, he joined Earl Hines’ Grand Terrace Orchestra as vocalist and occasional trumpeter. In 1944, Eckstine formed his own band which was the first bop big-band.

Eckstine made his last recording, the Grammy nominated “Billy Eckstine Sings with Benny Carter” in 1986. Eckstine was posthumously inducted into the Down Beat Jazz Hall of Fame in 2010.

Down Beat Jazz Hall of Fame