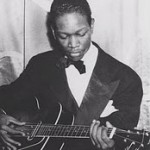 Christian was born July 29, 1916 in Bonham, Texas but raised in Oklahoma City, Oklahoma. By 1936, he was playing electric guitar and had become a regional attraction. In 1939, he was hired by Benny Goodman for the newly formed Goodman sextet. By 1940, Christian dominated the jazz and swing guitar polls and was elected to the Metronome All-Stars.

In 2006, Oklahoma City renamed a street in his honor.