By Chimsima Zuhri on February 18, 2014 in African American History, February 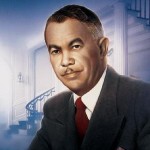 In high school, a teacher advised Williams against pursuing a career in architecture because he would have difficulty attracting clients in the majority-white community and the black community could not provide enough work.

Williams studied at the Los Angeles School of Art and Design and at the Los Angeles branch of the New York Beaux-Arts Institute of Design Atelier. In 1921, Williams became the first certified African American architect west of the Mississippi River and in 1922 he opened his own office. Williams was the first African American member of the American Institute of Architects and in 1939 won the AIA Award of Merit for his design of the MCA Building in Los Angeles.

In 1957, he became the first African American to be voted an AIA Fellow. Williams designed more than 2,000 private homes and his client list included Frank Sinatra, Bill “Bojangles” Robinson, Lon Chaney, Lucille Ball, Tyrone Power, Barbara Stanwyck, and Danny Thomas. In 1953, Williams was awarded the NAACP Spingarn Medal and he received honorary doctorate degrees from Howard and Lincoln Universities and Tuskegee Institute. Williams died January 23, 1980. Biographies of Williams include “Paul R. Williams, Architect: A Legacy of Style” (1993) and “The Will and the Way: Paul R. Williams, Architect” (1994).