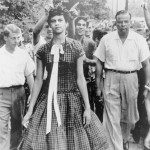 November 9, 1999 The Little Rock Nine received the Congressional Gold Medal which, along with the Presidential Medal of Freedom, is the highest civilian award in the United States.

The medal is bestowed by the United States Congress on individuals who perform outstanding deeds or acts of service to the security, prosperity, and national interest of the U.S. On May 17, 1954, the United States Supreme Court issued its decision in Brown v. Board of Education declaring all laws establishing segregated schools to be unconstitutional and calling for the desegregation of all schools throughout the nation.

By 1957, the NAACP had registered nine black students to attend the previously all-white Central High School in Little Rock, Arkansas. Arkansas Governor Orval Faubus deployed the Arkansas National Guard to block the students from attending the school. President Dwight Eisenhower ordered the 101st Airborne Division of the United States Army to Little Rock to facilitate the entry and provide protection to the students. On September 25, 1957, the Little Rock Nine successfully entered Central High School. During their ordeal, the Little Rock Nine were advised by journalist and activist Daisy Bates and for their efforts they received the NAACP Spingarn Medal in 1958.

In 2007, the U.S. Mint distributed a commemorative silver dollar to “recognize and pay tribute to the strength, the determination and courage displayed by African American high school students in the fall of 1957”. Two made for television movies have dramatized the events, the 1981 CBS movie “Crisis at Central High” and the 1993 Disney Channel movie “The Ernest Green Story.”