On August 10, 1989, Colin Powell became the first African-American nominated as Chairman of the Joint Chiefs of Staff, the highest-ranking position in the military. 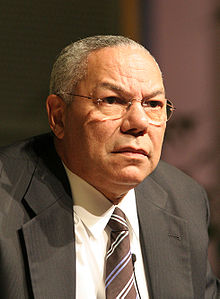 President George H.W. Bush chose General Powell to head the armed forces based on his stellar career as an army officer. Having an African American Chair of the Joint Chiefs demonstrated the long road the military had traveled from its history of racial discrimination against minorities. It was only in 1948, following World War II, that the military desegregated its troops. Furthermore, much of this integration was of the token sort, with full equality only established in the 1960s. By the late-1980s, it was clear the army, in just a few decades, had surpassed most of the nation in terms of inclusiveness.

Powell saw combat in the Vietnam War and successfully led from the Pentagon during the First Persian Gulf War in Kuwait. After retiring from the military in 1993, the General continued making strides by engaging in Republican Party politics, eventually serving as the first African American Secretary of State in the first administration of President George W. Bush.

Growing up in New York

The Colin Powell biography begins in working class New York City. Powell was born on April 5, 1937, in New York to Jamaican immigrants living in Harlem. He spent most of his formative years in the tough South Bronx. Avoiding the pressures of city life, Powell graduated high school in 1954 and headed for City College of New York (CUNY). It was at CUNY that Powell decided that a career in the army would be beneficial. He joined the Reserve Officer Training Corps (ROTC), excelled and earned a commission as an army officer upon graduation from college in 1958.

In 1962, as a young second lieutenant, Colin Powell was one of the first Americans sent to Vietnam. Though the major deployment of troops would begin later in 1965, Powell and 16,000, other men served as advisors, according to the Kennedy administration. A year later, he earned the prestigious Purple Heart after a booby trap injury while on patrol.

Known for his objectivity, the army chose Powell to investigate the cause of the infamous 1968 My Lai Massacre, in which American forces killed close to 500 Vietnamese civilians. While in Vietnam, Powell amassed eleven military awards for exemplary service.

Colin Powell continued to impress superiors, proving to be a smart, articulate leader. He earned a Master of Business Administration from George Washington University and attended the Army War College. By 1987, Powell, a brigadier general, was the national security adviser to President Ronald Reagan. His work came to the attention of George H.W. Bush, who was Reagan‘s Vice President. On August 10, 1989, President George H.W. Bush chose Powell, then a four-star General, to serve as the Chairman of the Joint Chiefs of Staff. This appointment made Powell the highest-ranking military member, responsible to the Secretary of Defense. As Chairman of the Joint Chiefs of Staff, Colin Powell oversaw the invasion of Panama in 1989 that led to the capture of rouge President Manuel Noriega. He also coordinated the 1990-1991 Persian Gulf War in Kuwait. Powell became a national sensation for his television appearances, in which he explained the war to the American people. People trusted General Powell implicitly, making him one of the most popular members of the Republican Party. In 1996, speculation ran high in Republican circles that Powell would run for the Presidency. He explored the opportunity but decided against putting his family through the pressure. After spending most of his married life serving the country, Powell told Republicans that he wanted to spend more time with his dedicated wife, Alma. Colin Powell remained prominent in Republican politics, nevertheless, and in 2001 again made history when President George W. Bush appointed him the first African-American Secretary of State.