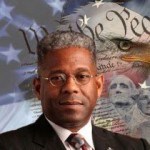 February 7, 1961 Allen B. West, the first African American Republican Congressman from Florida since Reconstruction, was born in Atlanta, Georgia.

He entered the United States Army in 1983 and participated in Operation Desert Shield and Operation Desert Storm. In 1997, West earned his Master of Military Arts and Sciences degree from the U.S. Army Command and General Staff Officer College. West retired from the army in 2004 as a lieutenant colonel.

After retiring, he served as in Afghanistan as a civilian adviser to the Afghan Army. In November, 2010, West was elected to the United States House of Representatives where he serves on the House Committee on Small Business and the House Armed Services Committee.