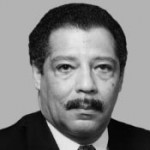 Dixon was elected to the California State Assembly in 1972 and served three terms before he was elected to the United States House of Representatives in 1978. As a freshman member of the House, Dixon won an assignment to the coveted Appropriations Committee where he remained for the rest of his House career. He also chaired the Rules Committee at the 1984 Democratic National Convention. The 7th Street/Metro Center transfer station in downtown Los Angeles is named in Dixon’s honor and in 2004 Southwestern University School of Law opened the Julian C. Dixon Courtroom and Advocacy Center.