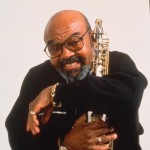 Moody was born March 26, 1925 in Savannah, Georgia. He joined the United States Army Air Corps in 1943 and played in the “Negro band” on a segregated base until he was discharged in 1946. In 1948, he relocated to Europe because he had been “scarred by racism in the United States.”

In 1998, the National Endowment for the Arts designated Moody a NEA Jazz Master, the highest honor the United States bestows on a jazz musician. In 2005, Moody established the Moody Scholarship Fund at the Conservatory of Music at the State University of New York.