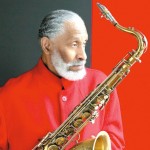 Rollins received his first saxophone at 13 and first recorded in 1949. By 1954, Rollins had recorded with such jazz giants as Miles Davis, Charlie Parker, and Thelonious Monk. By 1956, Rollins was leading his own groups and that year he recorded his widely acclaimed album “Saxophone Colossus.”

In 1957, he pioneered the use of bass and drums, without piano, as accompaniment for his saxophone solos. He was inducted into the Downbeat Jazz Hall of Fame in 1973 and in 1983 was designated a NEA Jazz Master by the National Endowment for the Arts. Rollins won the 2001 Grammy Award for Best Jazz Instrumental Album for “This Is What I Do” (2000) and the 2006 Grammy Award for Best Jazz Instrumental Solo for the single “Why Was I Born” which was on the album “Without a Song: The 9/11 Concert” (2005).