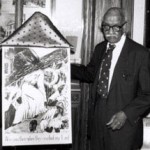 Crite was born March 20, 1910 in North Plainfield, New Jersey. He graduated from the Boston School of the Museum of Fine Arts in 1936 and earned his Bachelor of Liberal Arts from Harvard University in 1968.

Crite’s paintings generally reflect religious themes or the African American experience. He is quoted as saying, “I’ve only done one piece of work in my whole life and I am still at it. I wanted to paint people of color as normal humans. I tell the story of man through the black figure”. Crite’s paintings hang in many major museums including the Smithsonian, the Museum of Fine Arts, and the Art Institute of Chicago.