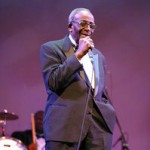 Tucker was born May 17, 1925 in Spartanburg, South Carolina. He joined the Hummingbirds in 1938 at the age of 13. In addition to his vocal skills, Tucker introduced energetic showmanship, including running through the aisles, jumping off the stage, and falling to his knees. Tucker performed with the group for 70 years, right up until his death.