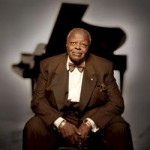 Peterson was born August 15, 1925 in Montreal, Canada and at the age of five began honing his skills with the trumpet and piano. At the age of 14, he won the national music competition sponsored by the Canadian Broadcasting Corporation. After that, he dropped out of school and became a professional pianist.

Over a career spanning more than 65 years, Peterson released more than 200 recordings and won eight Grammy Awards, including the Lifetime Achievement Award in 1997. Peterson also composed many pieces including “Hymn to Freedom” (1962) and “Canadian Suite” (1964). Peterson was called the “Maharaja of the Keyboard” by Duke Ellington and is generally considered to have been one of the greatest pianists of all time.

He was regarded in Canada as a distinguished public figure and in 1972 was made an Officer of the Order of Canada, the country’s highest civilian order for talent and service. Additionally, Peterson was awarded honorary doctorates by 13 Canadian universities. Weeks after his death, the Province of Ontario announced a $4 million scholarship for the “Oscar Peterson Chair for Jazz Performance” at York University.