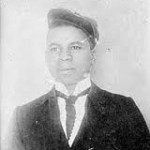 By June 30, 1898, Bell was serving as a private in Troop H of the 10th Cavalry Regiment, an all-black unit of the United States Army during the Spanish-American War. On that day, American forces aboard the USS Florida near Tayacoba, Cuba dispatched a small landing party to provide reconnaissance on Spanish outposts in the area.

The party was discovered and came under heavy fire, sinking their boats and leaving them stranded on shore. The men aboard the Florida launched four rescue attempts but were forced to retreat under heavy fire each time. The fifth attempt, manned by Bell and three other privates, found and rescued the surviving members of the landing party.

On June 23, 1899, Bell and the other three rescuers were awarded the medal, America’s highest military decoration. Bell reached the rank of corporal before leaving the army.