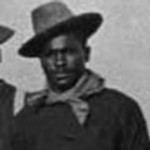 Walley was born March 10, 1856 in Reistertown, Maryland. On August 16, 1881, he was serving as a private in Company I of the 9th Cavalry Regiment when he participated in an engagement in the Cuchillo Negro Mountains of New Mexico. He was cited for “bravery in action with hostile Apaches” for helping rescue stranded soldiers under heavy fire. For his actions Walley was awarded the Medal of Honor, America’s highest military decoration, on October 1, 1890.

Walley remained in the army until 1907, serving in the Spanish-American and Philippine-American Wars. He was recalled to duty during World War I and reached the rank of first sergeant.