By Chimsima Zuhri on May 12, 2011 in African American History, May, Politics 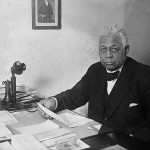 De Priest was born March 9, 1871 in Florence, Alabama. In 1889, he moved to Chicago where he became a successful contractor and real estate broker and built a fortune by helping black families move into formally all-white neighborhoods.

From 1904 to 1908, De Priest was a member of the Board of Commissioners of Cook County and from 1915 to 1917 he served on the Chicago City Council. In 1928, De Priest was elected to the United States House of Representatives. During his three consecutive terms from 1929 to 1935, as the only black in Congress, he introduced several anti-discrimination bills.

After being defeated for re-election in 1934, De Priest was again elected to the Chicago City Council in 1943 and served until 1947. His house in Chicago is a National Historic Landmark and Oscar De Priest Elementary School in Chicago is named in his honor.