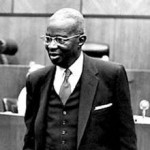 After graduating, Looby moved to Nashville to take a job as an assistant professor at Fisk University. In 1951, he was elected to the Nashville City Council, one of the first African Americans to be elected since 1911. In 1960, Looby defended the students arrested in the Nashville sit-ins and as a result his house was dynamited.

In 1976, the City of Nashville named a new library and community center in honor of Looby and in 1982 the Nashville Bar Association posthumously awarded him membership, a membership they had denied him in the 1950s.