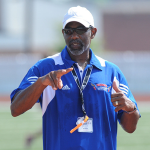 Myricks competed for Mississippi College and was the 1976 and 1979 NCAA long jump champion.

He did compete in the 1984 Los Angeles and the 1988 Seoul Olympic Games and won the Bronze medal at the latter. Myricks was inducted into the USA Track and Field Hall of Fame in 2001 and is currently President & CEO of Mega Sports International, a health, wellness, and fitness company.