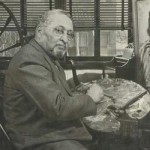 Scott lived in Chicago, Illinois from 1904 to 1909 and trained at the School of the Art Institute.

Later, he moved to Paris, France where he continued his education and was able to build a reputation from himself more easily than his race would have allowed in America. In 1931, he received a Rosenwald Foundation grant which allowed him to travel to Haiti “to paint those who had maintained their African heritage.”

Two of his more famous paintings are “Night Turtle Fishing in Haiti” (1931) and “Haitian Market” (1950). Scott portrayed blacks on canvas in positions of prominence doing noble deeds and through his paintings hoped to reverse the stereotypical perceptions of African Americans and eventually foster an understanding among the races. In addition to paintings, Scott did 75 murals, including “Douglass Appealing to President Lincoln” (1943) for the Recorder of Deeds Building in Washington, D.C. Scott died May 15, 1964. His work is in the collections of the Indianapolis Museum of Art and the Wichita Art Museum.